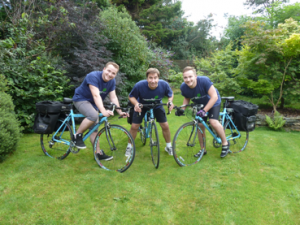 Stephen (54) Sam (19) and Joe (19) all from Dronfield are cycling to fundraise on our behalf. The courageous trio will take on the challenge without a supporting vehicle, using only themselves, their bikes and their camping gear.

Three years ago the trio prepared to cycle for charity from Land’s End to John O’Groats. The dates were set and preparation was underway when Stephen developed a sore throat. Stephen’s sore throat was diagnosed as Non Hodkin’s Lymphoma, and unfortunately the ride had to be cancelled. Fast forward a year, after treatment was completed the trio completed the original ride in 20 days.

The elation Stephen should have felt after completing the challenge was, however, missing.

It was a fantastic thing to do, something I’d wanted to do all my life and to achieve it with my sons was something special. Or it should have been. For some reason it just felt very flat, and I didn’t realise at the time that I was starting to slide into depression. Something that is not uncommon for people who’ve been through cancer.

He was referred to Cavendish Cancer Care who explained that during treatment and uncertainty the body produces more serotonin in the brain to help you cope. Once life gets back to normal these levels of serotonin drop back, but can often fall below where they should be. This vital support from the charity and Stephen’s doctor helped to put him back on track.

Life’s good again. I can even watch X Factor without shouting “who used to sing this properly”, which has also saved my marriage.

Now Stephen and his sons want to give something back. The trio are planning a ride to raise money for the charity and ensure that its services will continue to be available. For the route they will cycle from Dronfield to Hull to get the ferry to Rotterdam, then they will travel through Holland and into Germany where they’ll meet the Rhine at Cologne. Following the Rhine to Basel then down through France where Joe and Sam will to tackle Alp D’Huez the famous Tour de France climb. From there they will head down to Cannes, Nice and then Monte Carlo.

We are doing this in memory of Fathers, Grandfathers, Grandmothers, Aunts, Uncles, friends, colleagues & school friends. People that haven’t been as lucky as myself.