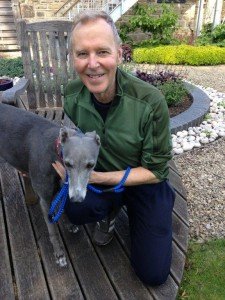 Peter is a semi-retired scientist and university professor. He was diagnosed with prostate cancer at the age of 65. He accessed support at the centre after he’d finished his treatment.

My outlook on life is that if you have problems you sort them out yourself with the help of family and friends, but not outsiders. This would be a sign of weakness, of being unable to cope.  I suspect a lot of men with prostate cancer feel like that.  After the initial shock of the cancer diagnosis wore off, I felt tired and low but I thought I was managing pretty well. In fact, when I was having radiotherapy treatment, every day for seven and a half weeks, I was totally focussed on that and actually felt somewhat brighter. But, after it finished, I felt so much worse! I wasn’t sleeping, I was very anxious, and I completely lost confidence. I was feeling very tired and weak, had various muscle and joint pains, as well as the specific side effects of the radiotherapy.

A few weeks after the end of the treatment I was given the Cavendish Cancer Care’s leaflet, which I took home and read. With my background as a scientist, I was sceptical of the value of the range of complementary therapies on offer, but I was feeling so down and tired that I thought it was worth a try. So I picked up the phone and spoke to a really nice lady and I was quite surprised that she arranged for me see someone so quickly, less than a week after I phoned, which I thought was impressive.

When you need help, and you reach that point where you pick up the phone, you want help soon. You don’t want to wait weeks for an appointment.

When I arrived at the Cavendish Centre, my first impression was that it had a very pleasant atmosphere, everyone was kind and friendly, and made me feel very welcome. I had an assessment with a lady called Paula, a warm and understanding person who got me to open up, to talk about how I was feeling and to explain what was worrying me most.  That first meeting was very useful in its own right, to just have 45 minutes with somebody neutral to talk to about my worries and anxieties. Paula recommended a treatment I felt a little unsure about: hypnotherapy. The idea seemed bizarre at first, but I was desperate and I thought at the very least it couldn’t do any harm. My hypnotherapist was called Mick who was very kind, considerate and empathic. During the first sessions it was remarkable how I felt, like a huge weight was starting to lift off me. Mick taught me how to deeply relax, which was a new experience for me. I later learnt a short routine that I can use on my own, and I was given a CD to help me to get ready to sleep. I use that a lot. I won’t stop using the techniques I have learnt as I have realised that being able to relax in this way is the key to being able to cope. I had 4 sessions altogether. In addition, I had a meeting with Delphine, a nutritionist who gave me some tips on how to improve my diet. The Centre also put me in touch with an acupuncturist, and I’m in the middle of a course of treatment to help with my various symptoms.

The transformation in me since starting my treatment at the Cavendish has been amazing. I feel so much better – I’m sleeping well, I’m less anxious, I’ve got more energy, more enthusiasm, and more confidence.

My wife and family are so pleased! My friends and colleagues at work have remarked on the change in me.

I’d tell anyone who is sceptical about complimentary therapies to just give them a try. The treatment I received at Cavendish Cancer Care was invaluable to me. It’s surprising how much of a difference it can make just to talk to someone, and be given time to reflect on what you’re thinking and feeling. And to do this in a place where you know they understand what you are going through. My only regret was that I did not seek their help much earlier.

You never know what’s next when you have cancer, and I don’t even know what the outcome of my treatment will be – I won’t know that for a few months. I know a lot about the disease from a scientific viewpoint, the risks involved and the probabilities of cure and it can all become overwhelming and really hard to deal with. I think anything that can help reduce these negative feelings, like hypnotherapy did for me, is hugely beneficial. Before coming to the Cavendish Centre, I was really floundering. I’ve still got some background anxiety of course and I don’t know what’s in store for me. But I’ve learnt how to cope with that, most of the time, and I’m now getting on with my life.