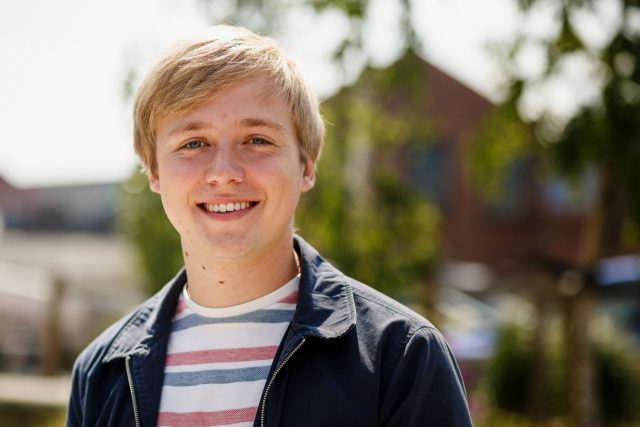 Gabriel, 23, lost his mum to cancer when he was just 15 years old. He was supported by Cavendish Cancer Care’s Children and Young People’s service at the time, and since then has volunteered for the speaking team to raise awareness of Cavendish’s work.

“I remember it clearly; people didn’t tell me at first that my mum’s cancer was terminal. I came to my own realisation of how ill she was a few of weeks before she passed away.”

“I was making decisions that a 30 year old would have to make, as a child. It was a really difficult time; my life had essentially been turned upside down. It was a period of high insecurity, there were lots of decisions to be made and I had to be grown up and make those decisions myself. After my mum passed away I made the decision to move in with my best friend and his mum to continue my education in Sheffield.

“Throughout my mum’s illness and after her death I put on a brave face as I didn’t want to burden family or friends and I didn’t want anyone worrying about me. My best friend’s mum knew someone working at the Cavendish and therefore suggested that I contact them.”

“The Cavendish centre felt like a safe sanctuary, everyone was incredibly kind, warm and friendly. It felt so far removed from my daily life and that was what was so nice about it.”

“I had counselling sessions at the Cavendish. For me, my mum had always brought me up to talk to people and instantly after my first session I felt like a huge weight had been lifted. To be able to talk and open up to my counsellor was something that I hadn’t done properly since before my mum passed away and it felt like a huge relief to be able to do so.
“It gave me security, reducing the turbulence of my daily life and a platform to talk about what was going on. A lot of the time my sessions weren’t purely focused on talking about my mum or what I’d been through, it was about everything else that was going on at that time. The ability to offload all that stress was the key benefit that the Cavendish really gave me.

“I began to see things more positively and realised that I could feel as I had in the past. I was in a difficult place and Cavendish allowed me to see beyond that.”

“I used the Cavendish services for around two years, and the point at which I realised it was time to leave was a lasting memory. Things were going well and I felt other people could benefit from the appointments that I was having.
“It transformed my life because it was an incredibly turbulent time where I had feelings of anger and sadness that I didn’t know how to deal with, but Cavendish helped me to feel positive about my life. I couldn’t hold the Cavendish and the care they provide in higher regard.

“A few years after receiving the support from the Cavendish, I returned as a volunteer. I felt that I’d received so much help and support over two years that I should go back and do as much as I could to help them. I have volunteered for a number of years for the Cavendish and I am currently part of the speaking team who provide talks to groups of varying demographics, such as schools, students and rotary groups to make them aware of the services provided by the Cavendish.

What if Cavendish hadn’t been there?
“At the time my school offered no services whatsoever, and it was quite scary that in a young environment they had no knowledge of how to help a child in my situation. I’m not the first child that’s lost a parent or grandparent to cancer, no matter how far removed everyone knows someone impacted by cancer. Therefore children and families having an understanding of the services available is incredibly important. Without Cavendish I wouldn’t have reached the same level of happiness.

“It essentially changed my life, there’s no other way of putting it. It put me on a safe stable platform and it’s accessible to anybody that needs it. No matter how much you think you might not need it, it might be worth giving it a go, give it one chance and see how you feel about it.

With the help of Cavendish Cancer Care and the support of friends and family, Gabriel was able to succeed at school. He has since left university and is now beginning a career as a Trainee Solicitor. Gabriel continues to volunteer and fundraiser for Cavendish and speaks at events as our Ambassador.