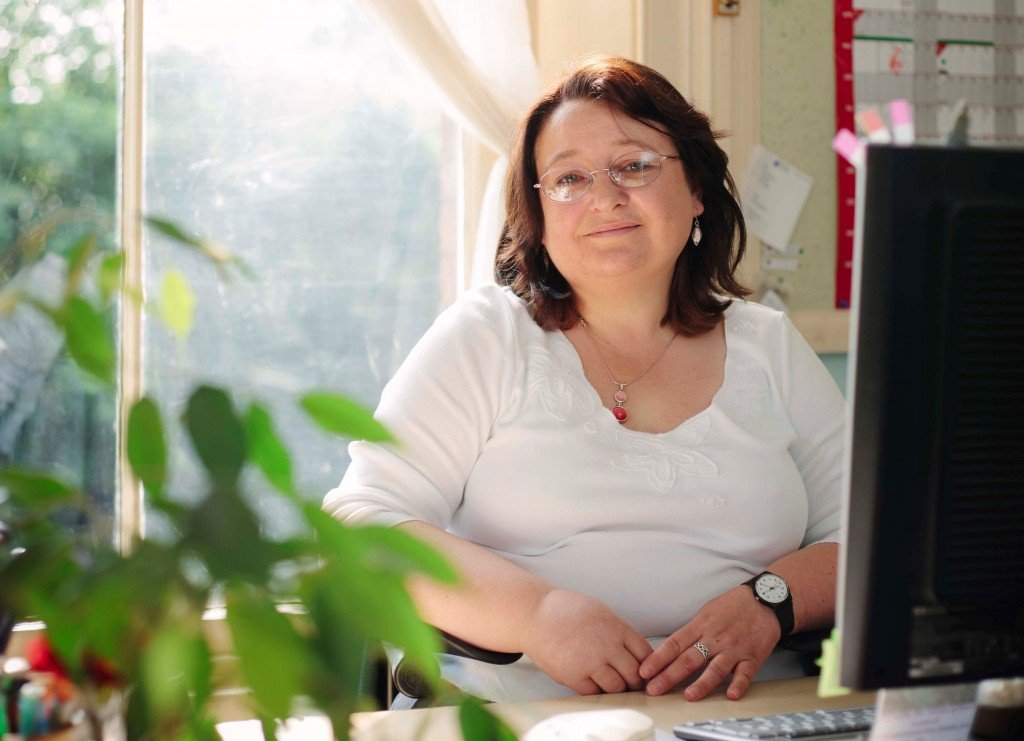 I’m a talker, from a family of talkers, but I just couldn’t find the words to say how I felt.

Dallas was diagnosed with breast cancer on April 11th 2003 aged 33. At the time she was working as a primary school teacher. In 2005 she left teaching and joined the Cavendish team. She currently works in our finance department.

My diagnosis came of the blue. There were no major illnesses in family, my grandparents had lived into their 80’s and 90’s, and I was healthy. I’d found a lump in my breast and I assumed I’d pulled something because I’d been teaching netball at school. The reality was a shock, there was a tumour that had probably been growing silently for 5 or 10 years; so it was more serious, Grade III, and it had started to spread to the lymph.

“I spent a year going between hospitals and doctors, something I’d never done.”

When you’re diagnosed you get files and files of information, most quite technical and medical.

Lots of the information is very scary – or it was back then – line drawings of women with square breasts. I just didn’t want to look at it. I asked my GP for counselling and they said there was at least a 3 month waiting list.

Soon afterwards I had a lumpectomy at Weston Park Hospital in Sheffield. To follow it up they recommended 6 months of chemotherapy every 3 weeks, then 36 sessions of radiotherapy followed by hormone therapy for up to 5 years afterwards.

“My boyfriend of 10 years left before my chemo ended.”

Within a matter of weeks I knew my boyfriend and I were going to struggle. He had a problem dealing with illness and I had to drag him to the diagnosis. He came to one or two chemo sessions but later said it was a waste of a day for him. Before I’d finished chemotherapy he’d packed his bags and left.

I felt very, very lonely. My parents were up in the northeast and they visited as much as they could. I was in Barnsley and I was finding things very hard. Part of me felt like it would be easier to give up, not something I ever really meant, but that’s not something you can voice to your nearest and dearest. They are going through turmoil too.

Thankfully my colleagues stepped in. At my school they were so understanding. They rearranged the whole school timetable so at least one member of staff could take me to the last four chemo sessions and the radiotherapy.

I wanted to say to someone “I just want to give up”.

Our family are talkers and usually we can talk about our feelings, but not this. There had been no major illnesses in our family at that point, so there was no frame of reference for us to help place things into context.

It’s like the numbness you have when someone dies, or waking up from a nightmare when you still feel scared in that first few seconds. Sometimes there aren’t any words, I couldn’t find anything to say and I couldn’t believe that there was no adequate vocabulary to express how I felt and no one to help me find it.

Luckily, in the run up to surgery I picked up a Cavendish leaflet. It said ‘Are you living with cancer?’ which was one of the few positive things I’d seen, so I clung to it. At my assessment I found I could open up, this person would not judge me on what I had to say or how I felt. Between myself and my assessor we decided art therapy might be the way forward.

I didn’t realise that art therapy is actually quite in-depth psychotherapy. You create images using any kind of media – pictures or clay ­– and use it to reflect on what it means to you in words, memories or images. This finally gave me a way to vocalise what was inside.

Within eight months of diagnosis almost everything about my life had changed. I sold my half of our house to my ex as I couldn’t get a mortgage, which meant a move into rented accommodation. I returned to teaching in September 2004 on a staggered basis. It was emotional to return, and ultimately I realised that it was no longer right for me. I had changed and the job itself had changed. It just didn’t gel any more, so I decided to leave in 2005. I questioned whether there was a place for me in the world any more, I thought what am I supposed to do now? Especially when my teaching career – my vocation – no longer seemed right any more.  I suppose I entered a grieving phase, I was grieving for the life I thought I was going to live.

Within two years, everything about my life had changed. Where I lived, owning property, newly single after 10 years, my job, being healthy. Fortunately there was a place to help me make sense of it. I knew I was heading back to a good place when I invested in a puppy!

I started doing some fundraising activities for the place that had given me so much. An opportunity opened up at Cavendish, helping out with admin support in the fundraising department. It was part-time initially but eventually led to a variety of roles and now after 8 years I’m in the finance department and also work as the volunteer co-ordinator.

What if Cavendish hadn’t been there for me?

Without the Cavendish there would’ve been little or nothing for me for probably a very long time; and I would have struggled to make sense of everything that happened.

I can’t be the only one whose life falls down around their ears. I think now that if the Centre wasn’t here, there would be some very unhappy, frightened people out there.

I tend to take life as it comes now. Cancer gave me the ability to leave negative emotions behind if there’s nothing I can do about them. I can get a bit down around anniversaries but I get through it because I know Cavendish is always there to fall back on, and I’m doing my bit to keep it there for others.