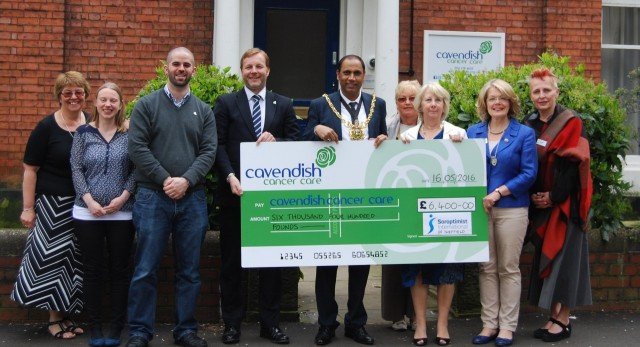 We were delighted back in May 2015 when Sally Kendall, President of Soroptimist International of Sheffield, chose to support Cavendish as her nominated charity during her year in office.  Over the last year we have been amazed by her fundraising efforts and the support we have received from the Soroptimists in general.

Sally started her fundraising in spectacular style with an abseil down a quarry edge near Grindleford, which raised over £1,000.  Since then she and other members of the club of have organised a wide range of events, including coffee mornings, a ‘Come Bowl with Me’ day and November’s ‘Vanity Fayre’ which was opened by Paulette Edwards of BBC Radio Sheffield.  On the day more than £600 was raised through a raffle, pop-up cafe and almost 20 stallholders selling a wide array of products such as jewellery, handbags, clothes and hand-made chocolates.  Sally also finished her year in style by hosting a fashion show in conjunction with Lucido Boutique which saw club members take to the cat walk and another £1,000 added to her fantastic total.

All told, Sally and the members of SI Sheffield raised £6,400 which will mean another 17 local families affected by cancer get the support they need and deserve.  Several members of the club recently visited The Cavendish Centre to present us with a cheque in the presence of the Lord Mayor.