Six charities. Sixty runs. One year, and a close group of family and friends determined to make a difference. Sixty4Judy is a charity challenge like no other – spanning multiple countries and raising funds for life-changing cancer research, and cancer and bereavement support.

Simon Hughes, 58, lost his wife Judith to a brain tumour in 2017. “Judith was very special, my soul-mate. She grew up in Derby, but spent most of her adult life in Sheffield working for both Sheffield Hallam University and Ufi learndirect. In her later years, we set up a successful Bed and Breakfast, near the Botanical Gardens. She was a loving mother and grandma, and a truly wonderful person – great fun, adventurous and intelligent, with a positive outlook on life. 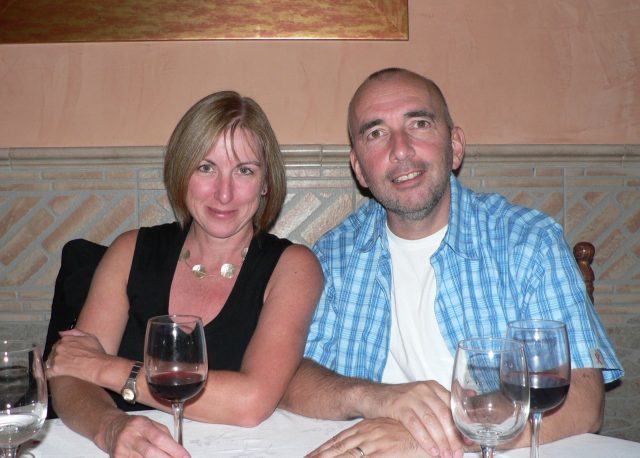 “We had a very happy life together, when, out of the blue, she was diagnosed with a terminal brain tumour at 59 years old. We were told within hours she probably wouldn’t live longer than a year. The happy life we had built was blown apart.

“The following 11 months were a blur. We tried to keep things as normal as possible, but there were daily trips to the hospital for radiotherapy, a complicated regime of chemotherapy and countless drugs, a bewildering new clinical language, and a home to run. We were both exhausted, but despite this, Judith was happy and peaceful. It feels strange to say this, but she had a good death. She was at peace – I was with her at home when she died, holding her hand. I’m so grateful we were together.”

Sixty4Judy came about out of what became a necessary therapy for Simon – running. “While Judith was ill, I’d occasionally go out for a run; it cleared my head and calmed me. The running continued after Judith died. One day, out near Porter Valley, this idea came to me that I’d like to do something to remember Judith’s 60 years, and to try to help our family by giving us a positive challenge. So, on Judith’s birthday, 6th December 2018, friends and family began the challenge of running sixty different races in a year. 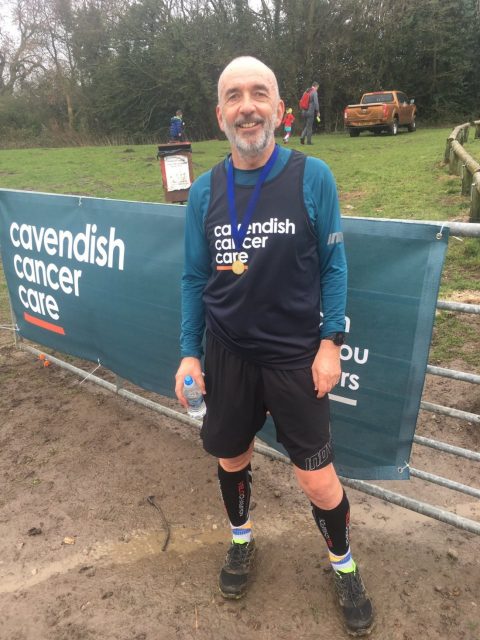 Simon at Sheffield Together 2019 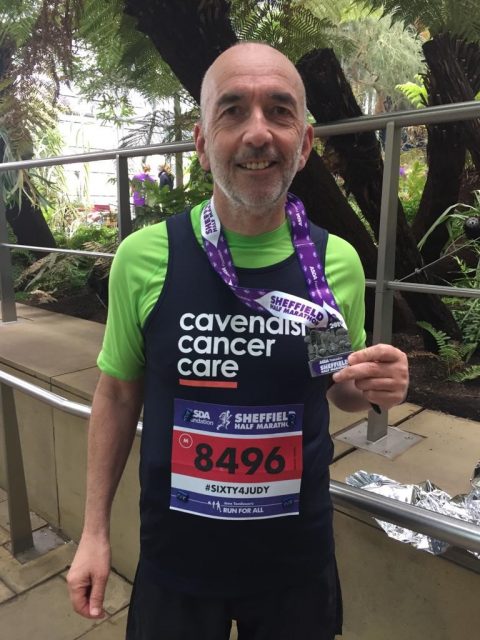 Simon at the Sheffield Half Marathon 2019

“First and foremost we want to raise money for six charities that were very supportive of Judith, four local to the Yorkshire and Derbyshire area, and two national:

“Cavendish Cancer Care supported us both. I received counselling, starting whilst Judith was still with us, and continuing afterwards. It was really helpful to be able to talk to someone who wasn’t involved. Sometimes it’s difficult to talk to family and friends, because you feel like you’re adding to their burden.  Judith also received Reiki and massage therapy. She looked forward to her sessions – they provided comfort in a difficult situation. I was able to wheel her down the hill occasionally to have a massage treatment and a coffee, and this provided some respite for us amidst what at times felt like carnage. It felt like a safe place.

Weston Park Hospital gave Judith a lot of treatment and help, and St Luke’s Hospice provided community outreach support in the home for Judith. So those are three Sheffield charities that are very close to our heart.”

“We’re also supporting Brain Tumour Research and Brain Tumour Research and Support Across Yorkshire, as brain tumour research is underfunded and vital to tackling this disease. We decided to support The Good Grief Trust as well, because our experience of being bereaved is that it can be quite hard to access bereavement services. The Good Grief Trust is trying to improve that situation.” 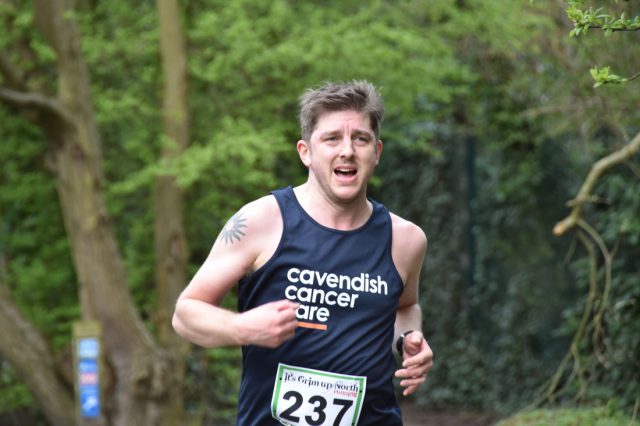 Sixty4Judy is comprised of events both in Yorkshire and Derbyshire, and further afield, run by different family and friends. Nicola, Judith’s daughter, is taking on the Couch to 5k programme, whilst Tom, her son, has joined a running club in Leeds and is running a range of events and distances. Simon is currently running 24 of the 36 events scheduled so far, with more to follow! He will also be running his first marathon, the Lakeland Trails Marathon, in June. “I always swore that I’d never run a marathon, because at the age of 58 it feels like quite a challenge!” Simon says. “But I’m not getting any younger, so now’s the time to do it.” So far, the Sixty 4 Judy team have run all over the UK, as well as in Granada, Lisbon and Abu Dhabi!

“What advice could I offer to others faced with loss? I feel I could write a book about that!” says Simon. “There’s no right or wrong way to grieve, as your own experience is unique. Be kind to yourself and seek help when you need it – I’m now receiving counselling and it helps to talk. It’s important to remember that you are not alone.  Physical attachment is gone, but the love and memories remain. Hold onto them, but don’t let them obscure everything else. We have to accept all life is temporary and embrace hope.”

Article in the Sheffield Star