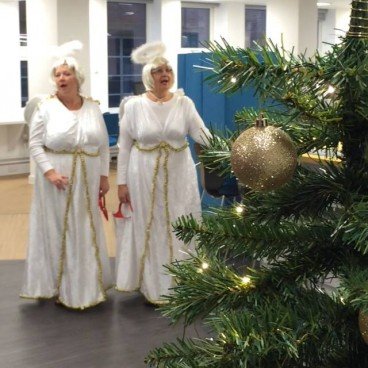 In support of Cavendish Cancer Care, staff at Sheffield Hallam University’s Facilities Directorate have gone the extra mile by bringing some festive cheer to University staff. Tina Fallon and Marie Ward, Domestic Supervisors became ‘The Singing Angels’, walking the length and breadth of the University’s campuses to entertain staff with their musical performance which involved a mash-up of traditional Christmas carol and a Elvis Presley classic, ‘Devil in Disguise’, raising a whopping £888 in the process.

The Angels were a key part of the Directorate’s Christmas fundraising campaign which has raised over £2,500 in the last few weeks. Other campaign activities have included selling tickets for the Cavendish Christmas Cracker, Choir singing and a charity stall at the University’s Christmas fayre amongst other activities

Mark Swales, Director of Estates & Facilities at Sheffield Hallam University said “The Facilities Directorate has been working with its new charity partner, Cavendish Cancer Care since September. Tina and Marie’s, aka ‘the Singing Angels’, fundraising total is absolutely fantastic. I have no doubt that Cavendish Cancer Care and patrons will be immensely grateful for what can only be described as a herculean achievement by the festive carol singing duo. Our Directorate’s mission is ‘Together We Make a Difference’ and nowhere has this been more evident. I wish to extend my gratitude to the hard work, commitment and generosity of all our staff in making such a huge difference to the lives of local people. We look forward to supporting the great work of Cavendish Cancer Care over the next two years”

Cavendish Cancer Care CEO, Chris Farrell, said: “We’re thrilled to be chosen as the charity for the Facilities Directorate and we look forward to working with them over the next two years. 2016 is our 25th anniversary, so we are hoping the Directorate can come up with something extra special to help us celebrate that! So far, the money they have raised will provide over 100 sessions of therapy for cancer patients and their loved ones.”