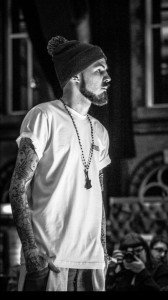 Sheffield-based model and tattoo fanatic, Ryan Scarbo, is taking part in this weekend’s Reds V Blues charity football match. The annual event, the ‘Reds V Blues’, which starts at 12pm at Hillsborough Arena on Saturday 20 June, has been arranged by Hillsborough Club FC and is in aid of Cavendish Cancer Care, the Sheffield Wednesday Community Programme and the Sheffield United Community Foundation. The celebrity football match kicks off at 3pm.

Ryan is becoming a well-known face on the alternative model circuit, featured on the Asos Marketplace and has lucrative contracts for high-street brands in the pipeline. He’s also due to appear on E4’s Tattoo Fixers soon.

As a staunch Sheffield United fan; Ryan will be taking part on the Reds team at the weekend, alongside the likes of Curtis Woodhouse, Wayne Quinn and Mark Todd.

“I’m doing this for my Mum who was diagnosed with cancer around five years ago,” Ryan explains, “and although we didn’t know about Cavendish Cancer Care at the time – I wish we had done. They do some amazing work and I’m proud to help them raise more money.”

The Reds V Blues day is free entry and under-16s must be accompanied by an adult. During the event, visitors can enjoy kickboxing demonstrations, music from the Oughtibridge brass band, dance performances, an air cadet mini assault course, a penalty shootout, an inflatable football pitch and rides and a FIFA 15 computer game tournament.