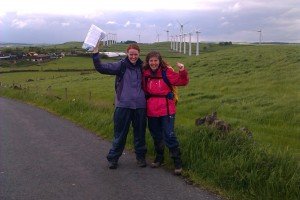 Suzanne Bridges took on the challenge of the Penistone Boundary Walk to raise funds for us. Suzanne’s husband Paul was diagnosed with testicular cancer again in August 2013 and received treatment up to a positive prognosis in January 2014

During this period they received support from us Suzanne said “not only was Paul offered complementary therapy, but to my surprise I was told that I could receive similar treatment myself. I enjoyed my aromatherapy and foot massage and the chance of a bit of space and me time. I really valued their support and want to be able to give something back to help others in a similar situation.”

Along with her friend Louise who was both moral support and pacemaker they took on the 16 miles (if you don’t get lost) of the walk. Below is some words from Suzanne and Louise 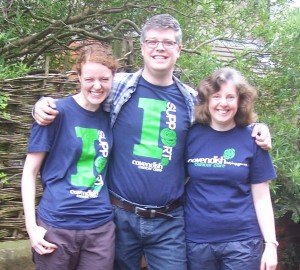 Day one: It was a challenging start to our charity walk, starting off in mild rain, after which it soon became both torrential and persistent! We soldiered on undeterred for 3 hours in the pouring rain before the weather finally got the better of us (6 miles)! Along the way we encountered various wardrobe malfunctions, including louise ripping her BRAND NEW waterproof trousers on barbed wire, waterproof clothes not living up to their claims and Suzanne nearly losing a boot in 3 foot deep mud!!! There were tracks that suddenly became rivers and some serious lack of signage.

Day two: Aching Muscles ! we completed the walk – we reckon we walked about 12 miles (including taking a few, ahem, scenic detours)! The rain held off although the ground was still somewhat soggy. The sun even made an appearance. We were cheered on by supporters on bike and in the car, treating us to ice cream and pointing out when we were walking in the exact opposite direction to that which we should have been walking, the powers of ice cream distraction! It was a long long day but we made it! Thank you for all your support, kind wishes and donations. We have exceded our fund raising expectations for Cavendish Cancer Care. And for our next challenge… stay tunned!
Suzanne and Louise are now seriously considering a map reading course as recommended by their friends, many thanks from all at Cavendish Cancer Care for you efforts.