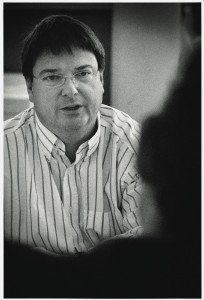 We are thrilled to announce that John Bryan is our new patron.

John is a 54 year old architect and businessman based in Sheffield.

He came to Sheffield to study architecture, and after University established Bond Bryan Architects in 1987. Over 20 years the firm developed into one of the UK’s top 30 practices, with a strong specialism in the design of all types of educational environment. John sold his interests in the practice in 2007, and after staying on to help a new team become fully established, left the business in 2010.

Since then he has trained as a coach and mentor, and also provides consultancy to professional service firms. He has chaired a building surveying company, an internet TV business, and an education knowledge community.

John first became involved with The Cavendish Centre in 2002, when his wife fell ill with cancer. The Cavendish helped the whole family at different stages of her illness and after her death, and John has remained a strong supporter of the centre ever since, and an advocate for its unique approach and services.

John began a three-year tenure as chair of trustees in 2012, and since stepping down has continued to support the charity in the background.

John said:  “The Cavendish is an absolute gem of a charity, playing a vital role for cancer patients and their families across the Sheffield region. There are thousands of local families who have taken support from the Cavendish’s skilled and dedicated therapists at a time of crisis, and who remain thankful that we have such a special charity in our community.”