Tonight: Murder at The Seaside to play Cav Folk Fest

Sheffield band, Murder at The Seaside, is playing in our charity Folk Festival on August 21st at Crookes Social Club.

The event is in aid of Cavendish Cancer Care, local Sheffield charity dedicated to improving the quality of life for people living with cancer in South Yorkshire. The cause is all too close to the hearts of the two band members, Phil and Sally, whose world was turned upside down.

In 2013, guitarist Phil began to feel unwell at a gig in Delaney’s Bar, Sheffield. Unbeknown to the band, it would be their last gig for some time.

Doctors originally thought that Phil had a chest infection but soon the couple were called in. Just four days before Christmas 2013, before setting off for a festive get-together, Phil’s Doctor called him in for a chat. There, he was told that his symptoms were likely down to sarcoidosis, an inflammatory disease that affects multiple organs in the body; or Hodgkin’s Lymphoma, a form of blood cancer. Instinctively, Phil seemed to know that it was the latter.

Phil’s doctor was 99% sure that he had sarcoidosis, but couldn’t rule out the 1% chance that it could, in fact, be Hodgkin’s Lymphoma. 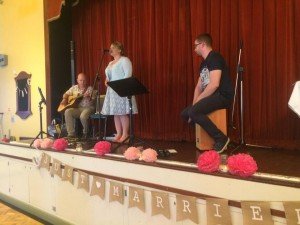 Just a few months later, Phil received a call that turned his world upside down. He had Hodgkin’s Lymphoma, and had reached stage four. Despite the devastating news, Phil and Sally kept a positive outlook; if he had been treated for sarcoidosis the treatment would have disguised his cancer symptoms and led to worse news.

“A cycle of intensive chemo therapy every two weeks was really painful and made me really weak.,” explains Phil, “it meant that I had to let go of another important part of my life for six months: my guitar.

“In January 2015, I was able to have a phased return to work as a lecturer at Barnsley College. The unhurried return has allowed me to adapt better to my situation and given me the time I needed to get through treatment. I plan to go back to work full-time in September; my one year anniversary of finishing chemotherapy.

“Looking back, I was never ‘frightened’ of the cancer; Sally and I went into ‘fight mode’ and decided to just get on with life. Mentally, it was one of the calmest times of my life; I wasn’t worrying about menial things that I had been before. However, sleep was a problem; I found it difficult to relax. I tended to think about philosophy and food instead.”

Phil found himself unable to concentrate on television shows, except for cookery programmes. Paired with the fact that the only thing stopping him from feeling nauseous during treatment was eating… Phil soon became a great cook.

When a specialist nurse recommended that Phil contact Cavendish Cancer Care in Sheffield, he was unsure and sceptical about whether complementary therapies would make him feel better. After a group hypnotherapy session, he decided to pick up the phone and book an appointment to see a qualified Assessor. 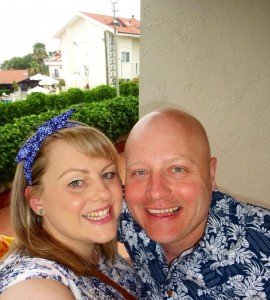 Sally says; “I was pleased that Phil decided to try out the Cavendish Centre. He was struggling to rely on people for everything and this was one thing he could do independently whilst I knew he was safe. I didn’t visit the Centre as Phil’s carer and partner, but I found great comfort in just knowing that the service was there for me.

“Cavendish gave him the confidence to push himself a bit further; soon he was heading out to gigs on his own or visiting friends. It lessened the strain on our relationship, which was a huge benefit to both of us.”

Phil was recommended to try Shiatsu Massage, based on ancient Chinese medicine and acupressure points. Eventually, the side effects of his chemotherapy were easing and he began to relax a lot more.

“Most of the time I found that I nodded off!” He smiles.

When his confidence grew, Phil decided he wanted to start picking up music again and bring Murder at the Seaside back into their lives. Sally was hesitant; she wanted to be sure that he was feeling well before she sang with him. In February 2015, Phil felt well enough to do a gig and they booked a slot at Sheffield’s The Green Room – a gig they’d had to cancel previously when Phil was ill.

“I was checking Twitter one day and saw an acoustic night in aid of Cavendish,” says Sally, “and I just knew we had to get involved. Music is our passion and we owed so much to the charity. So, that was it!”

From then onwards, gig bookings kept coming in and they found themselves acquiring a new member from a previous band. They even played at Tramlines Festival, something which had seemed an impossible dream the year before.

“I found that Cavendish allowed me to be someone I couldn’t be in front of Sally or my close friends and family. I felt like I could speak without scaring or upsetting them. I was able to sit with peers who were in similar situations to me, have a cup of tea and wait for my appointment. Shiatsu just allowed me to relax and find time to let go of the everyday routine that comes with cancer.”

“We’d have been lost without Cavendish.” Sally says, “That’s why we’re playing in the Cavendish Folk Festival this month.”

The festival, which Cavendish hopes to become annual, will be held on August 21st at Crookes Social Club, Sheffield. Tickets are £10 per adult and £7.50 concessions; to book your tickets call 07928 294 828.