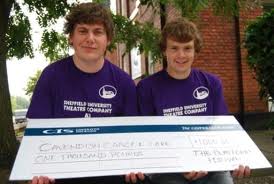 A donation of £1000 to the Cavendish Cancer Care  on behalf of the Platform Festival was received on 22nd September.

The festival, which was held in April 2010, was a performing arts festival organised by students of Sheffield University Theatre Company which aimed to encourage students to produce exciting new writing and styles of performance. The festival included established plays, productions of Wilde’s The Importance of Being Earnest, Brecht’s Fear and Misery in the Third Reich, and John Godber’s Teechers, alongside dance and physical theatre pieces, musicals, and new writing.
Prior to the festival, money had been raised by acquiring sponsors, holding fundraising events, and receiving a generous grant from the University of Sheffield Alumni Foundation. This funding allowed us to publicise the festival, hire venues, and provide technical support for each show. Over the course of the weekend, we generated over £1000 in ticket sales, and the festival proved a tremendous success. Hopefully in the coming years, the festival will grow and involve more people and groups from outside the university.

Thanks so much for the support!