BEAT THE CLOCK FOR THE CAVENDISH! 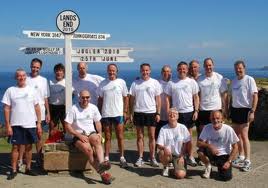 A running relay from one end of Britain to the other has raised vital funds for Cavendish Cancer Care.

Twelve runners from South Yorkshire set themselves a target of six days to complete the grueling challenge from John O’Groats to Lands Ends – and did it – with a day and a half to spare!

The JOGLER 2010 (John O Groats to Lands End Relay) was raising funds for the Cavendish and four other charities. The team ran through the night in all kinds of weather – each runner completing an eight mile section of the relay before handing on the baton to the next member of the team. The team pictured at the finish post at Lands End each took up the baton each 10 hours.

It’s the sixth year of the challenge and this time the dozen runners made it over the line in four and a half days and hope to raise £15,000

One of the team, Stuart Forrest, said:

It was a quite a hard slog this year but we all stuck together and can’t believe that we made it to Lands End in such a quick time. It must be because we were running down hill!!

Cavendish Cancer Care supports patients and their families in the Sheffield area. Jonny Cole, spokesman for the charity said:

We can’t thank Stuart and the team enough for helping us in this way. It’s a fantastic achievement and they should be very proud of their efforts – particularly the time they did it in.

The team is already planning JOGLER 2011 and setting themselves a double challenge – to go even faster and raise even more money for charity!