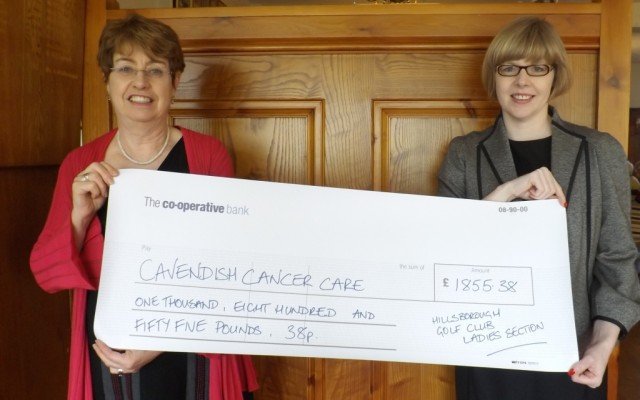 The ladies of Hillsborough Golf Club have raised over £1,800 to support our work. Through raffles, games nights and donations from members, the club have raised £1,855.38 over the course of a year, with Cavendish as their chosen charity.

We’re extremely happy with the amount raised, and this money will benefit a lot of people …

Cavendish is small local charity that doesn’t get much recognition, which is one of the reasons we chose to donate to them.

Cavendish provide support for families of people suffering from limiting life threatening illnesses, such as cancer. As a small charity, they rely on donations to carry out their work.

Rebecca Allison, chief executive at Cavendish, said “We want to say a huge thank you to everyone who has donated. This is a significant amount of money that will more families through hard times.

“We’re always looking for funding so it’s great to get help from organisations like this.

“As a small charity, a lot of people aren’t aware of the work we do, so it’s not just about raising funds, it’s about raising awareness too.”