Michelle Oakes and Scott Morris took part in the big fun run and raised £500 to support our work. Michelle wanted to help us pass the care on after recieving support formt he centre last year.

When I raised money for Cavendish Cancer Care in September 2012 by abseiling down a building I didn’t know that only weeks later I would be going to them for support. 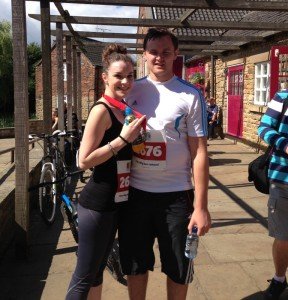 In October 2012, I had an operation to remove half of my thyroid. Two weeks later when the results came back that the lump they had removed was cancer I felt like my whole world had fallen apart.

I was extremely lucky that the opeartion had sucessfully removed the cancer and I did not require any further treatment, however dealing with the fact that I had had cancer was very difficult.

Cavendish Cancer Care helped me and I cannot thank them enough for their care and support.

Without being able to go to Cavendish Cancer Care and speak to someone I don’t know how I would have dealt with the 3 months between the results and seeing the doctor who told me that everything was ok.

Cavendish Cancer Care rely on donations to keep providing support to people and their family to help with coping with cancer. They do not receive funding.