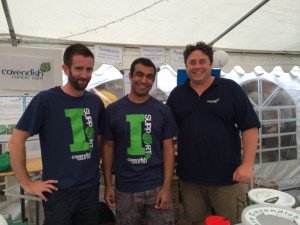 Back in March the fundraising team at Cavendish Cancer Care were slightly over-excited when they received a call from Sue Morton, Director of Abbeydale Brewery, to say they had been chosen as their charity of choice for their annual Sunfest Beer Festival.  The beer festival which was held at the Rising Sun pub in Fulwood on 10th – 13th July is in its 8th year and was bigger than ever this year.  The festival was attended by thousands of beer drinkers over the 4 days all eager to sample many of the 110 beers on offer from 81 breweries.

The team from Cavendish Cancer Care was welcomed with open arms to host a stall at the event raising funds in whatever way they could – in a prime location right next to the beer tent – and nothing was too much trouble for the managers of the Rising Sun and the team from Abbeydale Brewery. The brewery even provided hundreds of pump clips for the Charity to offer in return for donations and this was a surprising success amongst the beer aficionados, as some pump clips were collector’s items including several rare Tramlines pump clips made from old LPs.

As if being part of Sunfest was not enough, the chosen charity also receives proceeds from a charity beer that Abbeydale Brewery created for the festival, Dr Morton’s Survival Kit, which was available for the first time at the festival, and is now on sale in over 60 pubs and clubs with 10p per pint sold also going to support the work of Cavendish Cancer Care.

With nearly £1,000 raised at the event itself and a similar amount to be raised from the beer sales, the support of Abbeydale Brewery and The Rising Sun will enable the charity to support many more families who are living with and beyond a cancer diagnosis. Sally Eustace, Fundraiser at Cavendish Cancer Care said, “This was a great example of how to put the fun into fundraising and we talked to hundreds of local people over the course of the festival – spreading the word and raising vital funds that will have an impact locally.  We can’t thank Abbeydale Brewery enough for thinking about us and Rob and Julie at The Rising Sun for their amazing and generous welcome.”

Sue Morton from Abbeydale Brewery added, “The festival is a community event and we like to make sure we give back. When I saw a newspaper article about the Cavendish Cancer Care and how, like us, they were local and independent we knew our support could make a difference.  They do great work and make a positive difference on the ground – we were only too happy to work with them and we know they will put the funds raised to good use.”

She added, “It was another record breaking Sunfest for us in this, our 8th year, and we would like to thank all our staff, volunteers and, most importantly, our customers for coming along, showing their support and being so generous with our charity partner over the 4 days.  We hope everyone had as much fun as we did.”